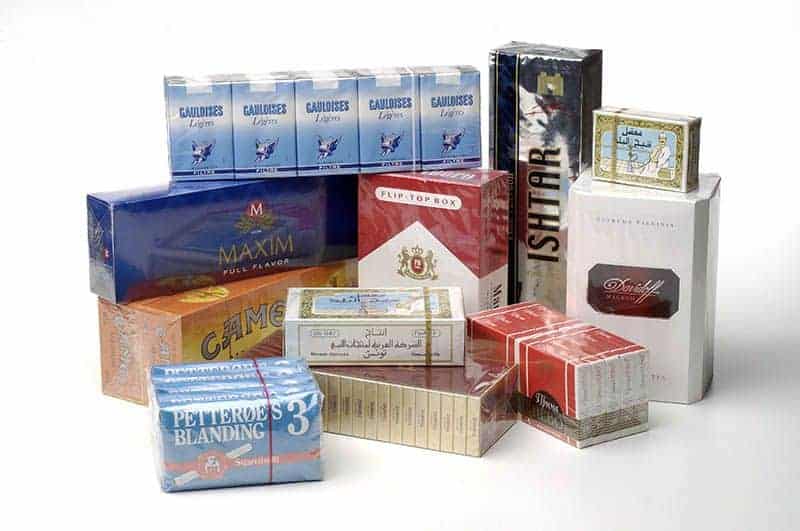 The purpose of this article is to explain the main styles and formats of cigarette and tobacco packaging that exist within the tobacco industry.  Some of the newer, more experimental, styles are also discussed.  It is interesting to note that none of the newer formats is yet to become “mainstream” and that there is still a production volume in the four main primary styles.  Secondary, grouped, and tertiary, distribution, packs are also discussed.

There are four main styles of primary cigarette packs.  By far and away the most significant is the “hinge-lid pack” or “flip-top pack”.  This is the name for the rigid cardboard pack which protects the cigarettes from damage and is most popular in western markets, although its popularity is increasing in eastern markets too.  The next most significant is the “soft pack” or “soft cup pack” which is essentially a pack of paper construction that offers less protection to the cigarette but is less costly to produce.

Before the hinge-lid pack was produced, and still popular in some parts of the world, is the “shell and slide” pack which offers the same protection as the “hinge-lid pack” but does not provide such easy access to the cigarettes.  Lastly, and most popular in Russia and the former Soviet Republics, is the “shoulder pack” or “clamshell pack”.  This is a stiff cardboard pack with a lid that opens in the same way as a tin of cigars.
Into each of these styles of packs are placed a number of cigarettes.  Typically these are either in quantities of 10 or 20.  However, some markets such as Australia favour 25, 30 or even 50 in a single pack.  For vending machine purposes, it is typical for 17, 18 or 19 cigarettes to be packed ensuring that the price sold is a whole number for ease of vending.

The most typical format for secondary packaging is the 200s collation – 2 packs high by 5 packs wide.  For maximum protection, especially if the product is destined for “duty-free”, a boxing machine collated and boxes the product before an overwrap is used to ensure pack integrity.  If protection is less important and the 200s collation will be unwrapped at the retailer, then clear polypropylene wrapping film is an economic method of forming the collation.  If it is unsure as to whether the collation is for direct sale or splitting down by the retailer, the use of either printed film or printed paper wrapping provides an economic method of packaging which is suitable for most sales channels.

As an alternative to the 2 high by 5 wide pack is the 1 high by 2 wide by 5 deep pack which produces a “brick” of packs in very nearly the same proportion as the individual pack.  These facsimile packs offer an attractive display face suitable for advertising or promotional purposes.

The 40s pack is generally two 20s packs wrapped together using a dissimilar polypropylene film to stop it from heat sealing to the primary wrap.  The 40s pack offers the consumer the promise of savings from a price point and the convenience of several days supply in one purchase.  The large multipacks, however, are film wrapped or boxed multiples of 200s packs which take advantage of differing taxation regimes, particularly in the European Union,  allowing the traveller to purchase tax paid cigarettes for personal consumption in the country of embarkation.

Most forms of special primary packaging are being produced to assist with product differentiation.  Some of the special types are variations on an existing theme.

The use of plastic, foiled sealed clamshells have been used for exclusive cigarettes.  Mimicking cigar packaging by putting cigarettes into tins has also been tried.  Other formats involve packing into a cylindrical tube.  In some markets, the flow wrapping of just two cigarette sticks together is an attempt to sell at a particular price point.

Anything which can increase the point of sale presence, enhance the appeal of the cigarette and still be produced economically will be tried.    As yet, no style has become sufficiently popular to displace any of the four types already listed.