Major cereal manufacturers are consistently choosing overwrapping as the preferred method to bundle and wrap their single portion products. Often accused of over packaging and of using too much packaging material, overwrapping does, in fact, provide an economic, high quality and environmentally friendly way of producing a retail multipack. 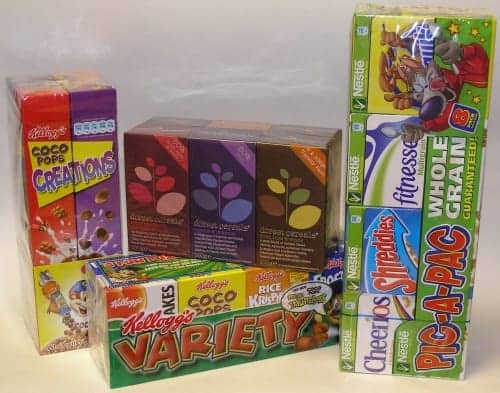 Overwrap works by folding film around the pack and making one lateral seal and two diamond point end folds at the ends of the pack. During this process, only a small amount of heat is required to create the seals.

The wrapped product is fully enclosed and the seal is of a near hermetic quality. The addition of a thin tear strip during the wrapping process also means that the multi-pack is straightforward to open.

In fact, for its new “Coco Pop Creations” product, Kelloggs decided not to use an inner film bag to contain the product inside the carton but instead rely upon the external overwrap to prevent the ingress of moisture into the product.

This compares well to shrink wrapping, where excess film often needs to be trimmed off during the wrapping process and perforation holes in the film mean that the wrap is not a barrier to bacteria or moisture. In addition, shrink wrap uses large amounts of heat to shrink the expensive polyolefin film around the pack, often distorting the appearance of the wrapped collation.

In many cases, the overwrap film is printed and registered around the pack during the wrapping process. Printing the film has many marketing advantages and is especially useful for describing the contents of a retail multi-pack. The film can be printed in such a way that the individual pack bar codes are obscured and that the only one visible is part of the print layout or is printed on-line. This is typified by the packaging film used for both the Kellogs Variety Packs, Nestle Pic-A-Pacs and the Dorset Cereals multi muesli pack.

To further enhance the environmental credibility of this type of wrapping it is now possible to use one of the new, plant-based biodegradable films, such as Natureflex from Innovia. Natureflex is, in fact, a type of cellophane, manufactured from wood pulp. Using wood pulp to manufacture films has two benefits. Not only will it biodegrade in landfill sites but the raw material comes from sustainable sources which cannot be used for growing food crops.